History of plywood furniture. How it all started? 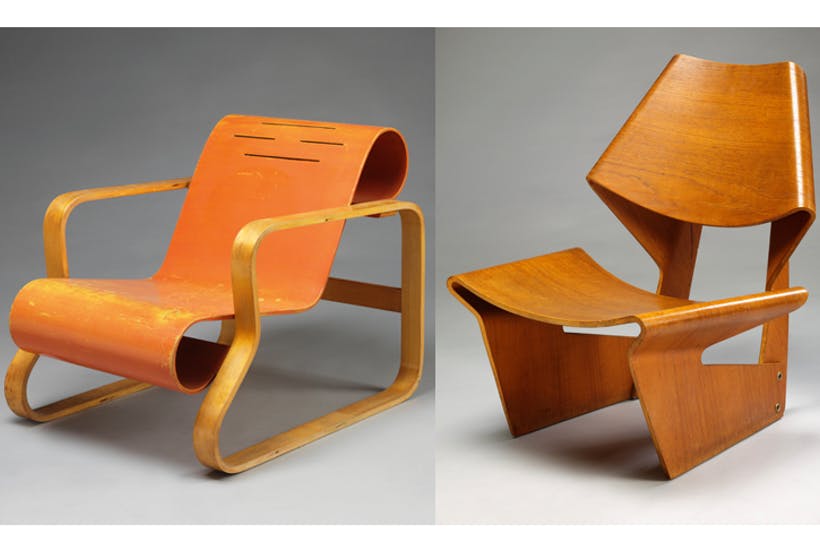 All of the factories in Tarmeko Group operate in different segments but what connects them all is that at one step they all use wood, more precisely birch. Tarmeko Veneer peels birch logs to cut veneer sheets; Tarmeko LPD needs these sheets to make bent plywood furniture. Tarmeko Upholstery uses the components that LPD produces for their sofas, armchairs etc. Knowingly solid wood is a more common material used in the furniture sector but how did using (bent) plywood start?
Using bent plywood can be traced back to early 2600 BC because the old Egyptians use the veneer sheets glueing technique. Many years later in 1874, an American Isaac Cole patented for the first time the technique of bending plywood. However, it is known that in 1830s the furniture designer Michael Thonet started testing glueing veneer sheets. He was able to do two-dimensional products. He continued using the technique on solid wood. With the model S45, which was an easy chair, the company “Gebrüder Thonet” was started in 1931. To make the chair more comfortable and elegant without upholstery, the designer Mart Stam created the wooden details in bent plywood.
In the 1930s the designer Alvar Aalto was the first designer to use bent plywood purposely in creating the product Piamio. In the following decades, many designers followed who contributed to the growth of using bent plywood. Among them were Marcel Breuer, Charles Eames, Eero Saarinen and Arne Jacobsen. A lot of famous furniture models are designed by them but moreover, are still in production and favourites around the world.
Mistakenly a lot of people think that in the history of plywood the most important figure has been straight plywood. In 1850-1890 was bent plywood very popular material and it was connected to many innovative solutions in different sectors, not only furniture. For example, in 1860s America, New York engineers designed the railway with plywood because this material was strong but easier to handle. Moreover, it was cheaper and a better alternative for the iron railway. Data of plywood mass production first appear in the 1880s when a Tallinn based company A.M. Luther started producing tea and packages boxes.
In the 1920s architects and interior designers started experimenting with the endless possibilities that bent plywood could offer. It was mainly considered an industrial material so it was more suitable for mass production. However, bent plywood got far: in World War it was used by the English in building planes, the Germans used it inside cars in the 1930s and in 1950s and 1960s the material reached homes because it was easy to process.
Although back in the day bent plywood was a popular material, a lot of architects and designers worked to develop this material further. In 1930s synthetic glue was created what in turn made it possible to produce waterproof plywood pieces. Now people could use plywood products outdoor. In the following decades bending plywood will be improved more and more so that it could reach the level we have today.
What can we talk about bent plywood in the Estonian perspective? In the beginning of 20th century, a plywood and furniture production company named Luther operated in Estonia. Their biggest reseller was in the UK and the company was called Venesta. In the product portfolio were hat boxes, handbags, suitcases (that were promoted as light but strong cases and for what the selection was quite wide). Luther tried to influence the industry so that people would use lighter baggage in the 1920-30s so that travelling with planes and cars would be more comfortable. In the 1870s a company called Gardner & Company in New York designed a chair of which the seat and back were made out of bent plywood. It was copied a lot in Europe and also by Luther who did it and sold it quite well.
Luther’s luggage, illustrative photo; Source: Estonian world, author of the photo Ann Alari
History of bent plywood is very detailed and long, which is why telling everything about it is quite difficult. We hope that this brief and informative overview gave you an idea of how fast and strongly the material has gathered popularity and how wide is the usage of this material. Still, we think that we have not seen everything just yet! When we regularly visit furniture fairs we see that the bent plywood possibilities are endless and even better are created. We hope to share our fair share of the achievements we do in the bent plywood furniture segment.
Sources:
1) https://en.wikipedia.org/wiki/Molded_plywood
2) https://www.vam.ac.uk/articles/a-history-of-plywood-in-ten-objects
3) https://tylko.com/journal/5-iconic-designers-plywood-furniture/
4) https://estonianworld.com/culture/look-estonia-plywood-material-modern-world/
5) https://www.spectator.co.uk/2017/07/how-plywood-helped-us-win-the-second-world-war/

Tarmeko at the London Design Fair 2019